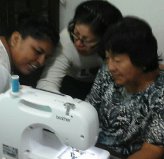 A creative celebration of Mayan culture is giving four Chicxulub women a delicious taste of independence.

Thanks to Suzanne Bourret for this story.

Chicxculub – the first of its kind in  the area.

A co-operative is an autonomous group which voluntarily co-operate through a mutually-owned and democratically-run business.

Buyers at the March Muelle Market couldn’t get enough of the eye-catching pieces.

Excitement bubbled around Carmita Pech, Aracely-X001, Rita Juanita and Perez Chable as they worked on their new project in November with their mentor, Jody O’Brien of Port Huron,Mich. She was helped by colleague Debbie Porter, also from Port Huron. Both are quilters.

The project is wonderful for all of us, says Carmita. It has given us new opportunities for work and the money helps us all.

One of the  women, a single mother, was depressed. Now she feels better. She is encouraged because she can work. She has hope, says Carmita, who is herself happy that she can now use a sewing machine.

Another woman has many ideas. This has given her the chance to show what she can do, she adds.

“Jody is a special woman for us.”

The project was started last November after Jody suggested the idea to Sharon Helgason who loved it.

The women are learning all the business aspects including material expenses, labour costs and pricing.

“They are the owners, stresses Jody. They have to learn how to run their own business,” says the former glass jewelry business owner.

She has encouraged fabric shops in her Michigan community to provide material discounts and her quilting groups  are donating new fabrics and supplies.

Her husband, Michael O’Brien, has created business cards and is doing promotional work for the venture.

Future plans are to use the Mayan designs for clothing including shawls, skirts and on fabrics for tank tops,dresses and wall hangings, as well as backpacks for men.

All fabric is pre-washed and printed on both sides. That’s why we use batik, says Jody, who describes how she’s been stopped numerous times in airports by people who ask about the designs and where she got them.

The women usually work three times a week,often from 5 p.m. to 1 a.m. in a small office, and also sew at home.

Jody hopes they will eventually have their own place where they can meet in well-lit working conditions and keep their materials.

And Carmita  hopes they’ll be able to start their own markets to sell their designs both in Progreso and in Merida.

As for now, they all feel more secure that they have a chance to make a livelihood.

Side story to Mission:

* Build an earning opportunity for women in the impoverished region of the northern Yucatan coast.

Be sure to visit their table at the Muelle Market this season. 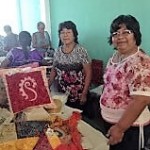 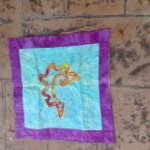 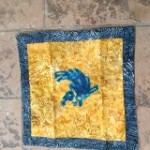 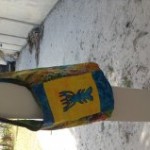 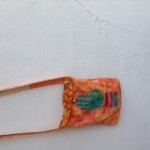