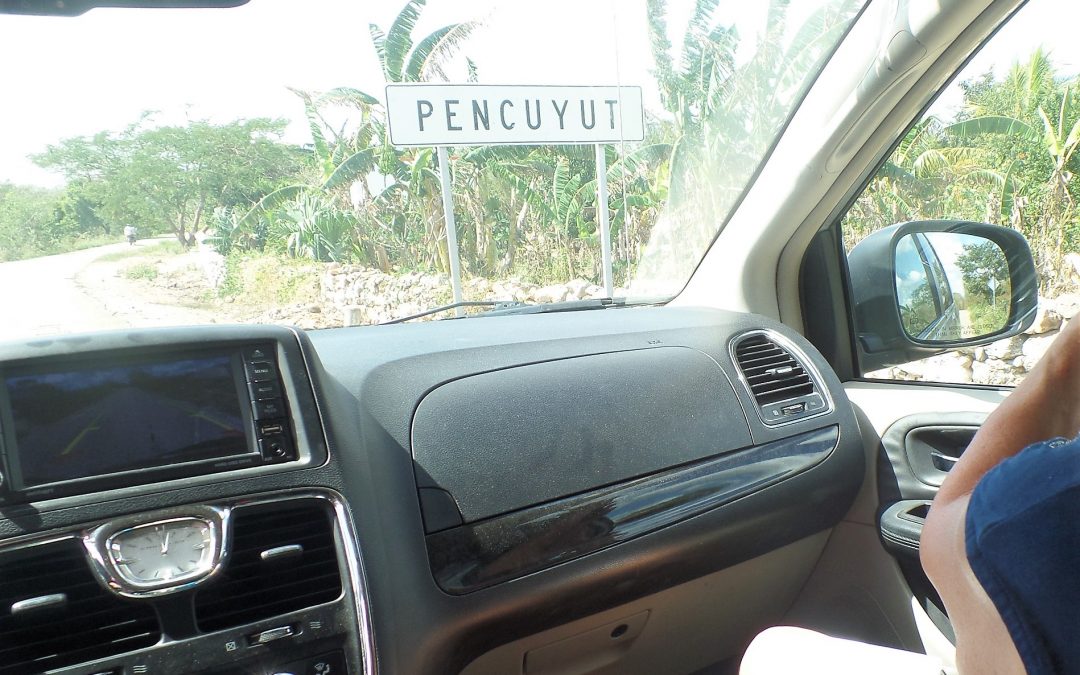 On Feb. 12th a group of us travelled to Pencuyut and Xbox to deliver donations of clothes for the village people in both places.

It was a wonderful and fun day and very successful.

These are photos that tell the story much better!

Adventures in Pencuyut and X’box! written by pilot Steve and co-pilots Heather and Kay on the adventure!

It all started with a trip to Progreso to rent a van to deliver some donated clothes to a couple of villages south of Merida. After a couple of prerequisite cold ones, we talked to one of the waiters who knew a guy who knew a guy and so on! Pretty soon we had a Chrysler Town and Country in our possession, we were a few pesos lighter in the pocketbook and away we went to load up. The plan was that everything would be  loaded into bolsas parra basura (garbage bags), then into the back of the van and ready for an early departure the next day. Well, it didn’t go quite as planned but by 10pm, with some help from Carlos Morelos, we loaded three big suitcases in the roof rack and all  the bolsas in the back of the van!

Kay arrived bright and early and away we went, or so we thought, one quick stop at a hardware supply store El Jordan to get some cable ties to hold the roof rack in place and we were off!

First stop was Pencuyut, a little village located about 25 minutes off of Hwy 184 down what would be considered a single lane road back home, but here was a two way complete with oncoming dump trucks, motorcycles and cars! Led to some tenuous moments for a first time driver in Mexico. However we made it in one piece despite the potholes that would make a Manitoban proud! Luckily, everyone in town knew where our contact Marbella lived, so shortly after we arrived, we were there dropping off half our load of goodies. After a quick tour of their beautiful property complete with chickens, roosters and a massive pig, Maribella’s family treated us with a glass of Coca then we were off to Xbox.

We had to bring Marbella and two of the family with us as interpreters as our next stop spoke primarily Maya.

Xbox was another 20 minutes south of the Pencuyut turnoff down 184, then another 15 minutes down another side road, this one a little wider than the Pencuyut access! As we pulled into town, I said to Kay that the mayor of the town should make a deal with Microsoft for naming rights, lol. The village was even smaller than Pencuyut, maybe 211 people so we quickly found our contact and were directed to the local church for our  drop off. By this time, a large group of local kids that were on their way home from school spotted us and came over  to see what was up with the Blancos in the shiny new van. After a brief discussion, about 15 of them hopped into the back of the van cheering and screaming, and joined us for a short excursion to the church – all except one youngster who started crying, maybe thinking we were taking him from home, lol! With the help of the students, some of whom didn’t look like they weighed a whole lot more than the bags they were carrying, were quickly unloaded. Then they all climbed back into the van, and amidst more cheering, we drove them the 30 seconds back to the starting point! We were then invited to partake in some escabeche de pavo (turkey soup), which was excellent. We were wondering how the family happened to have a big pot of soup brewing and freshly prepared tortillas, salsa and a glass of Pepsi when they didn’t know we were coming – no cell phones and very few land lines in this place. We subsequently learned that one of the family members was heading to Canada to work on a berry farm in British Columbia the next day, and the soup was actually for his farewell party! We limited ourselves to one bowl, although I would have gladly eaten more, then we were off back to Progreso.

The travel home was uneventful except for a few thunderous rain showers that required us to slow down but thankfully washed all the scratch marks off the side of the van from going to Pencuyut! All in all a great day and a wonderful experience!