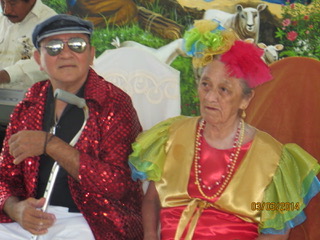 The crowning of the king and queen of Carnaval at the Albergue was Saturday at 1:30 pm in the auditorium. It’s always a fun event.
and this year was no different.

Benito and Sofia were this year’s dignataries.

The Mens’ group has been busy all season scraping, sealing and painting

Seven new dressers were delivered this week for the women’s dorm (which makes a total of nine this year), but they require some varnish with a touch of stain. Ixmael wants to spray them with insecticide prior to doing the varnish, to maximize their life. Many thanks to the JeunEspoir group for this purchase.

Bob is looking into purchasing cat traps to control the number of strays that inhabit the complex.

The exercise group has been getting together every week to exercise and interact with the residents. Much fun is had by all.

They love playing with noodles and balloons!

From Paula, our wonderful leader…..and a special thank you from me.

To all my great volunteers,  Thank you for being there for the residents,  for each other and for me.  Some days it was too cold and the residents didn’t want to exercise; now it’s too hot and very few come.  I did say to Pauline, Scarlet and Lorrie and Ken  there would be a class next Tuesday the 19 of March but there will not be a class. I might go in one day to visit and talk to people, maybe throw a ball in the front rooms,  but i won’t be doing a class.  For those returning home soon, have a safe trip (now that you don’t have to fly on a Boeing 737 Max 8). For those of you you still have a few more weeks here in Progreso/Chicxulub, enjoy the heat, the people, and the easy going lifestyle. Some people have asked me for photos and to be perfectly honest, i can’t remember who it was.  I know Jackie asked me for some but someone else also did.   So I apologize to those of you you might have received these photos already, Have a great summer,  and as they say here: Si Dios quiere, nos vemos el año próximo. God willing, we’ll see each other next year.Abrazos, Paula